KTM Front Sprockets and Oil Leakage: There seems to be a number of myths floating that associate certain front sprockets with oil leakage on KTM four-strokes. The sectioned model below should clarify this. Oil is sealed at two points on the countershaft: Everything to the right of the lip seal (cream color) is submersed in oil.

First at the O-ring. This is a static or non-sliding seal that rotates with the countershaft/sprocket. As can be seen, the dome washer on the outside of the sprocket loads all of the elements, beginning with the screw, then the dome washer, the seal spacer bushing, an O-ring, and finally the inner race of the countershaft bearing. If the dome washer becomes distorted and flattened, it allow this stack of parts to develop clearance between them including the O-ring seal faces. If you are leaking oil around your sprocket, first check to see if the dome washer can be spun with some channel locks. If it can be spun, buy a new dome washer. Yours is flattened. Yes, a slightly thicker sprocket will make up for a worn dome washer, but the sprocket is not the cause. It would be like milling a cylinder head to make up for bad compression rings.

Second is the countershaft lip seal: This is a sliding seal – the seal being stationery and the shaft/bushing spinning. KTM has a very good design here in that they have used a hardened steel bushing to minimize wear from the seal. Do not begin changing this seal unless you have first ruled out the O-ring issue described above. The most common cause of these leaks is a flattened dome washer allowing clearance around the O-ring. It only take .010″ of clearance (.25mm) to allow seepage. 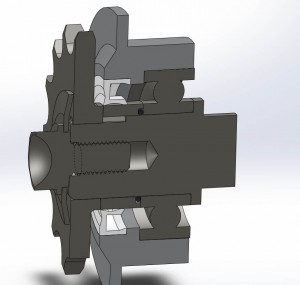 Our testing has determined that the OEM dome washer is made of mildly heat treated material. When that component is installed under a tightened countershaft bolt, it is taken well beyond it’s “yield” or “elastic” limit and permanently deforms. In that condition in cannot maintain the thrust pressure necessary to keep the sprocket tight to the splined shaft. That leads to two different failures. First, as described above, the O-ring is allowed enough clearance that is begins seeping. Secondly, the backlash between the splined shaft and sprocket is allowed to more freely pound in each direction, as the torque of power verses compression reverses itself.

Dirt Tricks has developed a tool steel, heat-treated dome washer that develops two to three times the preload force without reaching it’s elastic limit and without overstressing the mating components. This solves O-ring leakage as well as extending the life of both the countershaft and sprocket splines. A countershaft replacement alone, with labor costs in excess of $700.

If you plan to keep your KTM four-stroke for many seasons this product is well worth the small investment.

Why does my bike Leak Oil Around the Counter-shaft?

For twenty plus years, these manufacturers have used a “spring washer” or “dome washer” along with a locking bolt to retain 4-stroke and newer 2-stroke counter-shaft sprocket. A retaining ring is used on most 2-strokes.

This is usually what gets replaced in order to eliminate the oil leak. Often the leak still remains after replacing the seal. So how is the oil escaping? We were frustrated as were many, so we disassembled everything possible behind the counter-shaft sprocket. Then we 3D-modeled what we found in order to figure out where the oil was coming from.

If you study the diagram below, when the spring washer does not hold pressure against the sprocket, the entire stack of parts – from sprocket bolt to the bearing race, is loose. That allows that small O-ring to separate from the face of the bearing race and there is the oil path. Without a functioning O-ring, the spacer bushing is just a pipe for the oil to run through.

When performing hardness tests on the spring washer, we determined that it was not much of a spring, and yielded the first time is was compressed and would not spring back. We solved the problem by producing a through-hardened, tool-steel replacement spring washer that acts like a true spring.

When removed, unlike the OEM washer, it returns to its original dome shape. The Dirt Tricks dome washer can be repeatedly re-used. It is extremely hard and tough.
We hope this has not been to over-technical, but with a little detective work, we have solved a simple but nagging problem. So if you have a counter-shaft oil leak, start by replacing your spring washer with the Dirt Tricks dome washer.

Also consider replacing the sprocket bolt with this upgrade, snapping them off is a pretty common thing unfortunately.